The Dent du Geant is one of the 4000ers of the Alps. It is one of the 100 best ascent described by the famous French guide Gaston Rébuffat. For me, this has also been the second sighting of an Alpine madonna in my climbing week after the Grepon one as there is an other one of the 4 madonnas of the Mt Blanc range on its summit.

The weather forecast was for a crystal clear blue sky and Louis suggested we climb Géant branché on the right of the normal route but it was pretty unsettled as we started! So we changed the plan and started the normal route (D-, IV+)!

And because it was unsettled, we almost ran.... 5h15 of climbing overall, back to the Torino hut at the same time than parties who left 3 hours earlier!

So. We started just before 9am from Pointe Hellbroner, walked on the Geant Glacier with amazing views on the Aiguilles de Chamonix and on République which we climbed a year ago. After crossing the bergschrund (I don't like them!), we scrambled up to a place called the Dining room which is where the climb really start. Soon we get to the fixed rope of the famous Burgener slabs before reaching the first summit at 4009m.

Then we arrived to the true summit, Pointe Graham at 4013m. Amazing scenery despite the bloody unsettled weather.

Soon, it was time to go down through a succesion of very (very) steep abseils. Following that, we down climbed back to the glacier, en route to the Torino hut where we started. 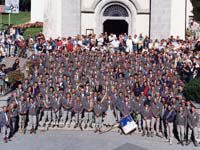